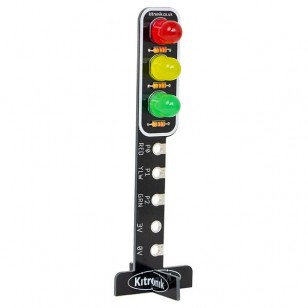 Description
The STOP:bit for the BBC micro:bit is the ultimate upgrade for traffic light/pedestrian crossing projects. Not only does it make coding the project a breeze, the board is supplied pre-assembled so you don't even need to fire up the soldering iron. Love it or hate it, variations of the pedestrian crossing project have been around for decades. When I did mine, it was on a 6502 EMMA board and coded with Assembly and it also included a level crossing. Thankfully, tapping low level programming languages into a hexadecimal keypad is now a thing of the past. The Kitronik STOP:bit is a purpose built accessory that can only lead to a more enjoyable project with a nicer looking end result.

If your scope is larger than a single traffic light, you can use the microbits radio module to communicate with other lights if they also have a microbit attached. This is great for exploring traffic management in a town or city.

We have also had some custom blocks added to the MakeCode Editor to make the job of coding this project much more simple. This will allow you to do this project in class with younger students. This is further reinforced by STOP:bit being pre-assembled, so there is no soldering or fiddly mechanical fixings, other than those used to secure the microbit, to worry about. However, you are not confined to using our custom blocks, you can also use the 'digital write pin' block.

To add our custom blocks to the editor; Click on the cog in the top right of the editor and select 'Add Package' from the menu. This will open a dialog window with a search box. Type Kitronik into the search box and all of our custom blocks will appear as tiles. Scroll down and select the tile tittled 'kitronik-stopbit' and it will be added to the blocks menu.

Features:
Upgrade your microbit traffic light/pedestrian crossing projects.
Code it with the Microsoft MakeCode Editor.
We have added some custom blocks to the MakeCode Editor to make the job of coding more straightforwards, which opens up the project to younger children.
Attach the BBC micro:bit directly to STOP:bit for a tidy wireless project.
It comes pre-assembled and looks great.
If using multiple STOP:bits you can use radio to coordinate traffic management.

Buy British:
This product is designed and manufactured in the UK by Kitronik.